Recent Additions to our Special Collection of Antique Maps

The Library has recently acquired about 30 rare and precious Chinese and Japanese maps for our Special Collections. These items, many of which are manuscripts, add a new dimension to our collections, which has its strength on maps printed by Europeans.

One of the most precious maps in this acquisition is an early Japanese coloured manuscript copy of Matteo Ricci’s seminal wall map of the world. Mounted on six panels, the map is 170 cm tall and 380 cm wide when fully open. It is visually spectacular, and embodies rich historical value. Ricci’s map was originally printed in 1602 at the Jesuit Mission at Beijing; only eight known complete copies are extant. 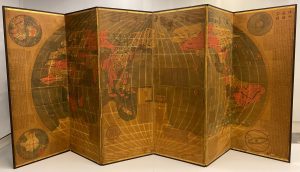 The tradition of making manuscript copies began almost immediately after its printing. Japanese copies such as these are faithful copies of the 1602 woodblocks, and are also exceptionally rare; there are no more than 20 copies known. The excellent condition of this copy is noteworthy due to the fact that it was stored in special chests in a Damyo’s treasure-house. The screen is gold-edged and has a black wooden frame.

Ricci’s projection closely followed previous European world maps but it placed China towards the center of the map to
reflect the Chinese notion of their place in the world as the ‘Middle Kingdom’. This arrangement sets America on the eastern borders of the map, a fact which was later to confuse the Japanese who heard of America as one of the ‘western countries’. 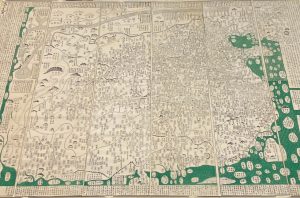 Other remarkable items in the lot include 20 Chinese manuscript maps of local administrative areas of the Ming and Qing dynasties, either with fine painting on silk for high officials or in a simpler style on paper for local officials.

In addition, we must highlight a very special manuscript copy of a star map, made by the Jesuit missionary at the Qing court Ferdinand Verbiest 南懷仁 (1623 –1688); it is an original source for historical research on the exchanges of Chinese and western cosmological views. The lot also includes three volumes of the 1618 edition of the Dong-Xi Yang Kao 東西洋考 “On the Eastern and Western Oceans”, a report on countries in East and Southeast Asia from the Ming period; an 18th century manuscript
map of East Asia; a map showing the boundary between Yunnan and Burma in the 19th century with place names in both Chinese and Burmese. 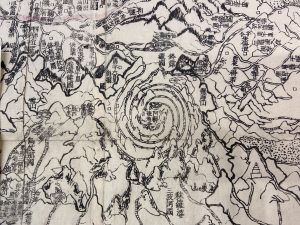 Last but not the least, we acquired a Buddhist world map, an outstanding example of religious cartography. The detail below shows what the map considers the center of the world, a helix in the middle of the Himalayas, coming out of the heads of sacred animals, and from which the four sacred rivers of the regions radiate: the Indus, the Ganges, the Brahmaputra and the Sutlej.

They will be studied and digitized, and made available to the HKUST community both online and in an upcoming exhibition.

Leadership development programs are popular among business corporations and public institutions. Many of you may not know that there has been an established program specifically designed for professional librarians in Hong Kong since 2003!

The Annual Library Leadership Institute was held this year from January 17-20 at the University of Hong Kong Libraries. Four HKUST librarians attended, and the program included two speakers from HKUST. Diana Chan, our Director of Library Services, gave a talk on libraries’ roles in the world of open access and globalisation. Gabi Wong, the Head of Research Support Services, conducted a workshop for librarians to create their personal leadership development plan. 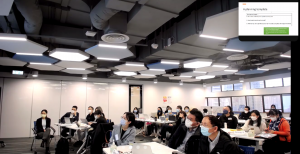 Drawing on her rich experience managing library collections and interacting with publishers, Diana shared insights on the trends of open access (OA), academic publishing and scholarly communications. One focus of her talk was Transformative Agreements, an emerging model for libraries to support our researchers to make their publications OA through new contractual and subscription arrangements with publishers. This year, the Hong Kong Research Grants Council (RGC) is rolling out new requirements on OA publishing for funded output; Diana’s talk was very relevant and timely for all librarians working in research institutions.

Gabi’s workshop focused on librarians’ individual career growth. Starting from the standpoint that leadership is not confined to positions with authority, the workshop guided participants to explore their leader roles and leadership skills irrespective of their seniority. Through discussion, group activities, and self-reflection, participants became more aware of their own leadership development journey in their librarianship career.

The HKU Libraries founded this Leadership Institute in 2003. Ever since, the annual event attracted many library leaders from Hong Kong, Greater China, and other Asian countries. Coming to its 18th run in 2022, the baton of organising the Institute has been passed to JULAC, a collaboration of eight libraries in the UGC-funded universities.

中國人口普查數據庫 – This Chinese CNKI database provides integrated access to the 3rd through 6th National Population Census of China held in 1982, 1990, 2000, and 2010. Population data at the country, province, centrally administered municipality, and county unit levels are included. The 7th NPC data will be added in the 4th quarter of 2022. Close to 480 volumes of NPC publications will be available on completion. Say goodbye to the paper volumes and explore the search and data export functions of this online version.

British Standards Online (BSOL) – “Denied access” messages should be a thing of the past from January this year due to a major upgrade of BSOL to include all modules. This database now includes all British standards, and international and European standards that have been adopted as British standards, organised around 53 subject areas. New modules cover Energy & Heat Transfer Engineering, Environment & Wastes, Information and Image Technology, Aircraft and Aerospace Engineering, Chemical Technology, Information and Finance, and lots more.

iTalks in February and March

In February and March, the Library will host two iTalks, one in English and one in Cantonese. 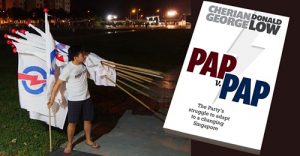 At the first talk Prof. Donald Low of HKUST and Dr. Cherian George of HKBU will discuss recent developments in Singapore politics as addressed in their recent book PAP v PAP: The Party’s Struggle to Adapt to a Changing Singapore (hard copy in our book collection – call no. JQ1063 .A98 P4634 2020).

This book explores many questions: What are the prospects of political reforms in a liberal-democratic direction in a country that has long defied the predictions of modernisation theory? How resilient is Singapore’s model of illiberal democracy or soft authoritarianism? And will such reforms undermine the strong state and economic success that have been the hallmarks of Singapore?

[ Note – due to Covid, this talk will be delayed or will move online. ] 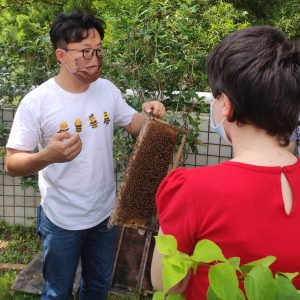 In March, the focus will turn to bees. Bees are very important and effective pollinators but bee populations are threatened by habitat loss, climate change, deadly parasites, and the use of pesticides in the past decades. Lancelot Shir, 2011 BSc (Mathematics) graduate of HKUST and founder of Hong Kong Raw Honey, will give a talk on Bee Happy 養蜂‧生態‧保育. He will share the importance of bees to biodiversity, their impact on humans, and the different types of bees and beekeeping situations in Hong Kong. Mark your calendar to meet this rock star Maths tutor turned beekeeper. This talk will be conducted in Cantonese.

This year has seen the start of real planning for the Library at the new HKUST-Guangzhou Campus.

Building – We have met extensively with the campus architects and designers on the building design. It will be a signature element of the campus. The main shell of the building has been finished, and current work on-site is focusing on the fitting out of the interior, and adding glass and other elements for the exterior. The building should be handed over for installation of shelving and furniture in Mid-May. 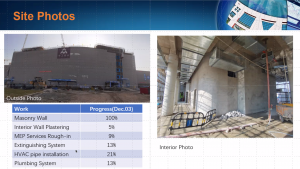 Staffing – The Director of the Library will be Foster Zhang, with distinguished record including helping found the CUHK-Shenzhen campus Library.

Tenders – About 50,000 recent books and bound journals will be transferred from CWB to GZ. We have had great help from the senior University administration in working to smooth the process of this one-time transfer.

The tender for a book agent to purchase and import new print books is well in hand.

The RFID tender was completed and awarded. This will involve installation of hardware as well as tagging of all print materials (50,000 transferred from CWB and 25,000 new book purchases).

A sole-source tender proposal for the Integrated Library System (ILS) was accepted, and the new campus will use the same Alma/Primo combination as in CWB. The next few months will be the implementation period, with a ‘go-live’ target of June 2022.

The tender for agents for e-resources and subscriptions is in a preliminary stage, with access scheduled with the campus opening in September.

We have assembled a detailed spreadsheet of furniture and equipment requirements, covering everything from shelving to kick-step stools. CDFMO-GZ staff have been putting this into a tender, and will combine standard furniture elements (like office desks) with broader campus ordering.

We have also worked with various GZ technology and systems staff to clarify what the Library will need for audio-visual equipment and for integration into the smart campus infrastructure. This includes electronic door access controls linked to a central space management and room reservation system, PA system controls, network access, and a range of other needs.

Timeline – A detailed timeline document was compiled for GZ Library planning. It is subject to change as needed, but serves as useful guidance. 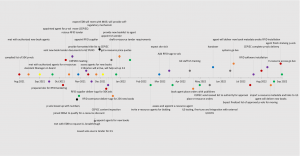 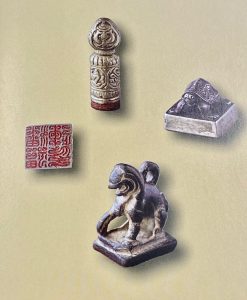 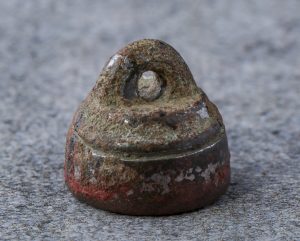 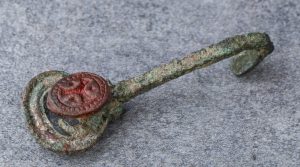 The Power of Diversity – Artistic Visionaries from HKUST

Commemorating the 30th Anniversary of HKUST, the Library and DAO will showcase an exhibition entitled The Power of Diversity – Artistic Visionaries from HKUST. The exhibition will open on February 24. It features artworks from three visual artists and one photographer, all our own alumni, displaying the versatility and diversity of HKUST, and exploring possibilities from our graduates.

Jeanie Leung, who quit the banking industry to pursue her dream of being an artist, showcases paintings of her signature character “Oowa”, along with related books and figures. She has restarted her creations these days even

though she is a mother of two children. Her small daughter is contributing two works, highlighting the beauty of motherhood as well.

Claudia Sin, whose pilot career was disrupted by the pandemic and the closure of Cathay Dragon, specializes in drawing about pets and animals during days without flights. The vivid artworks, together with her family photos, hope to evoke attention and appreciation to family life and animals.

Vivian Ho, renowned as an important new generation artist for the city, depicts the city life of ordinary people. Using her imagination and sense of art, she will spur fantasy, fascination, and pride for our hometown. 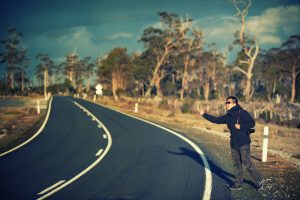 Terence Pang, who left the IT field after a decade of experience, has now become an award- winning photographer. Focusing on photojournalism, his productions depict different facets of the world in and outside of Hong Kong.

Located at the Ping Yuan and Kinmay W. Tang Gallery, these artists showcase their works in one collective exhibition. With their similar HKUST backgrounds, they bring out the theme of Together We Empower – the collective is more important than the individual. Activities such as talks about the exhibition will follow. Stay tuned for detailed announcements.

NO Smoking in the Library

Sadly, there have been a few recent cases of smoking in the building. Abandoned e-cigattettes have also been found.

Be considerate of others, and of campus safety. NO SMOKING! 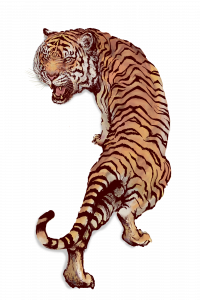